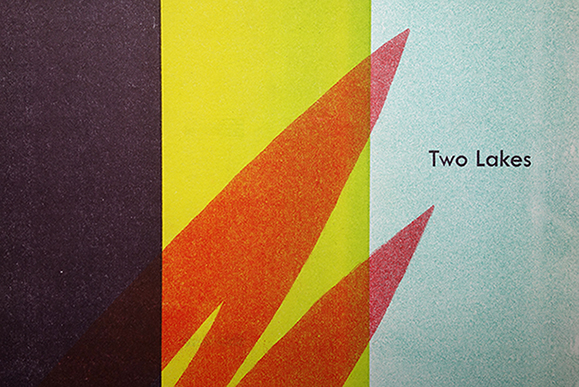 NewBridge Books hosted an artist talk to extend and explore the themes raised by the current exhibition Print in Practice.

Hosted by the founders of Foundation Press, the talk used a screening of Deborah Bowers’ collaborative project, Two Lakes, as a departure point to investigate print as part of wider artistic practice. Annette Knol from Kottishop and Publishing Puppies, Berlin, also joined the discussion.

First a film and then a book, made by Amelia Bande, Deborah Bower, Mat Fleming & Annette Knol. This short abstract colour gel film was made in residence at Filmwerkplaats, Rotterdam and has been selected for screenings at BFI London Lesbian and Gay Festival, Mix New York Queer Experimental Film Festival and FLAMIN Selected III programme.

“A visually stunning cameraless film. Luminous color gels explode across 16mm film to create a luscious tapestry of hues accompanied by a voice-over narrative of a teenager moving to “The City”—which remains nameless to evoke mythologies of the metropolis. Two Lakes, in this way, challenges perception through medium and narrative. The youngster’s excitement for their first queer party and the hustle of city life is paralleled by our excitement for this new kind of film that makes the camera unnecessary.” [Mix New York Festival]

TWO LAKES the Book was printed by Deborah Bower and Annette Knol at Kotti-shop by Publishing Puppies in Berlin.

Publishing Puppies is a small press from Berlin dedicated to print new work by writers and visual artists. They will bring a selection of their catalogue of hand-made books and talk about their vision and techniques.

Foundation Press is a print facility run by the Foundation Art and Design programme at the University of Sunderland.  Based around a Risograph machine, the press aims to support the development of new works with their students and also through collaborations with artists and other one-off projects. NewBridge Books is a shop and social space offering diverse, original and hard-to-find books, zines and art writing from independent publishers and artists who self-publish.  Through a dynamic programme of regular discussion groups, talks, screenings, performances and meetings, NewBridge Books provides a supportive space in which to exchange ideas.