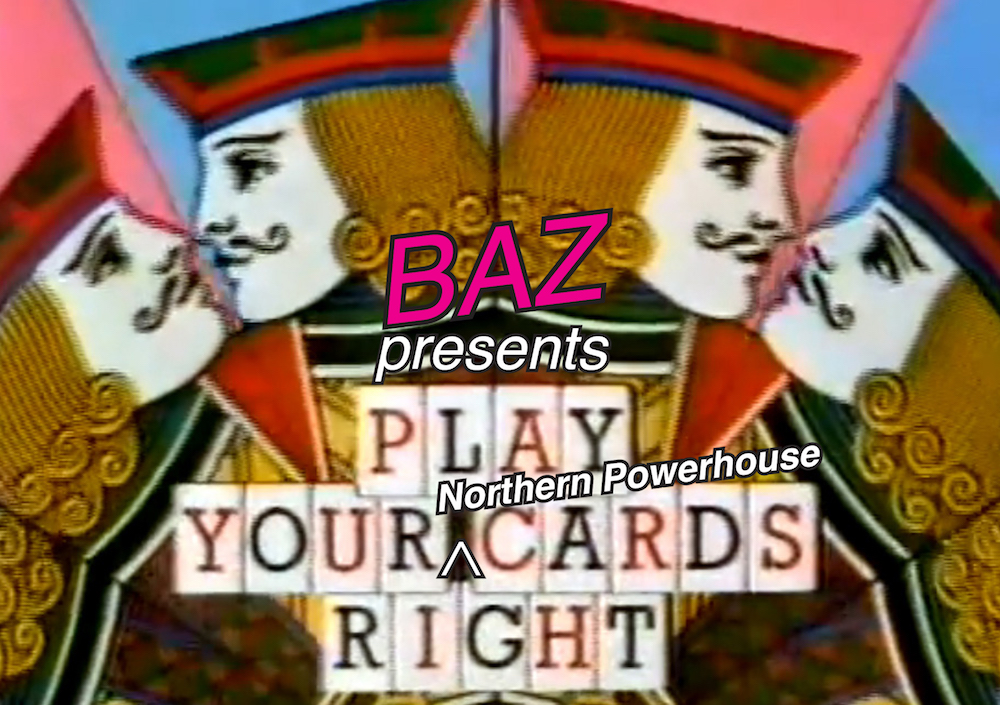 To conclude their exhibition ‘The Regeneration Game’, BAZ (Chris Poolman and Matt Westbrook) presented a night of light ‘artertainment’(1)and the chance to play their version of the hit 80’s TV show.

During their time in Newcastle BAZ researched(2) the movers and shakers of the North East’s cultural renaissance(3) and with their findings designed a special ‘Northern Power 52’ deck of cards, featuring key individuals from art organisations from across the region.

“To play the game pairs of contestants will first have to assume the identity of local property developers(4) and guess the correct titles of well-known public artworks. If successful they will go through to the ‘bidding round’ where they will be encouraged to shout ‘Higher!’ or ‘Lower!’ at cards emblazoned with gallery directors and council officials. Prizes(5) may be awarded to winning couples, but BAZ(6) assert that it is the hypothetically risking of a local art economy that counts(7).”

It may all be pot plants on swing-bridges, and galleries in the Cowgate roundabout up here, but regeneration is a gamble, and BAZ know all too well (from living in the West Midlands), that it’s not the cards you hold, but how you play a poor hand that generates regional success.

(3) They read this in the Chronicle so it must be true.

(4) By wearing a high vis jacket and a hard hat.

(5) Such as leasing rights to key inner city brownfield sites.

(6) Always in capitals and in italics.

(7) You may hypothetically lose a nationally regarded and culturally significant car park, but gain a Tesco (or other major supermarket).

(8) Br. ing money and a low expectation for contemporary art