Throughout the Blazing New Worlds programme, we were celebrating the 11th birthday of The NewBridge Project. We wanted to mark the occasion with our members and communities, bringing everyone together for a special series of events and creative discussions built collectively. Blazing New Worlds explores the current and future roles of artist-led spaces within their communities, our own role in Shieldfield over the next 5 years, as well as the physical and political shifts revealed by Covid-19. Through this ongoing programme and the open calls, we have been focusing on three key areas Value Beyond Capital; The Practice of Care; and Surviving and Experimenting in Times of Uncertainty.

On January 26, we launch 2 new commissions, both in collaboration with Shieldfield Youth Programme, during Slack’s Radio Residency in the gallery space: Sponge Issue 02 by Millie Carmel Jobson and A Frame by George Stewart!

Sponge Magazine Issue 02 by Millie Carmel Jobson brings professional graphic designers and children together through a series of interviews and gives them the same platform to express their thoughts and opinions on the same six questions in one publication. The six interview questions are based on the six stages of artistic development that we all experience as a child from 0 – 16 years and the questions underpin the designers and children’s creative thinking and processes. Both the children and designers’ insights and opinions are as equally important as the other in Sponge and the magazine celebrates the naive and expressive creativity we all had as a child, and can still have, and the beauty in that. 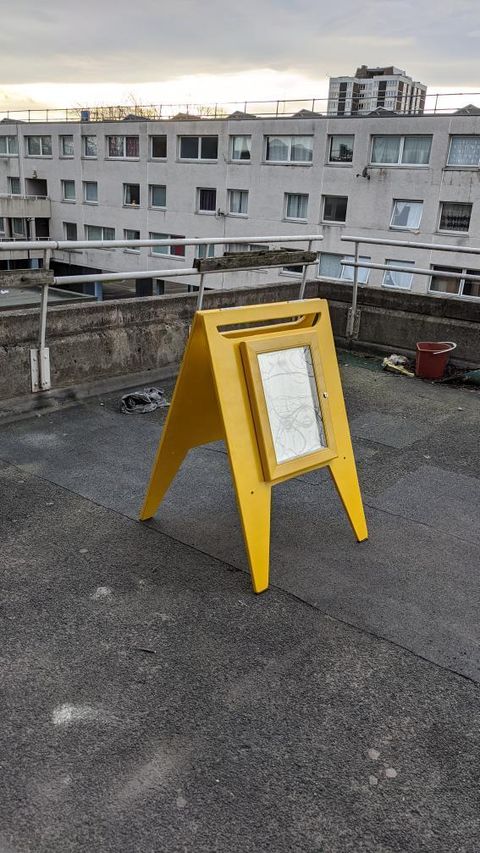 A Frame by George Stewart s a public gallery situated on street level outside NewBridge. The project will create new conversations, and support people to create Risograph prints that will be exhibited in a-frame.

A frames (sandwich boards) originally arose in response to inability to self-represent/promote in the traditional way. Which mirrors the current state of post lockdown Newcastle, after all the studio groups being up rooted at once, leaving local artists without enough spaces to make or exhibit their work. Unlike most galleries which are located out of sight and remain undiscovered by the wider community, A Frame gallery will be situated on street level. It will engage with the local community, hopefully will start a conversation and inspire people outside of art circle.

Blazing New Worlds is a programme of commissions, events and workshops in celebration of The NewBridge Project’s 11th Birthday. Throughout the programme a series of open calls and funding opportunities were released and supported projects were hosted in the gallery and online. Commissions by the artists Graeme Hopper (Grassi Art) and Cassie Thornton have been publicly displayed in the gallery throughout the programme, since October.

We commissioned Slack’s founder Jon Cornbill, to construct a radio booth that has been on display in the NewBridge gallery throughout the Slack’s Radio residency. The first round of the residency saw Slack’s Radio take over the gallery with a programme of music, performance, spoken word and conversation.