OPENING WEEKEND! We are opening at the Shieldfield Centre on Friday 22 March – come and join us! 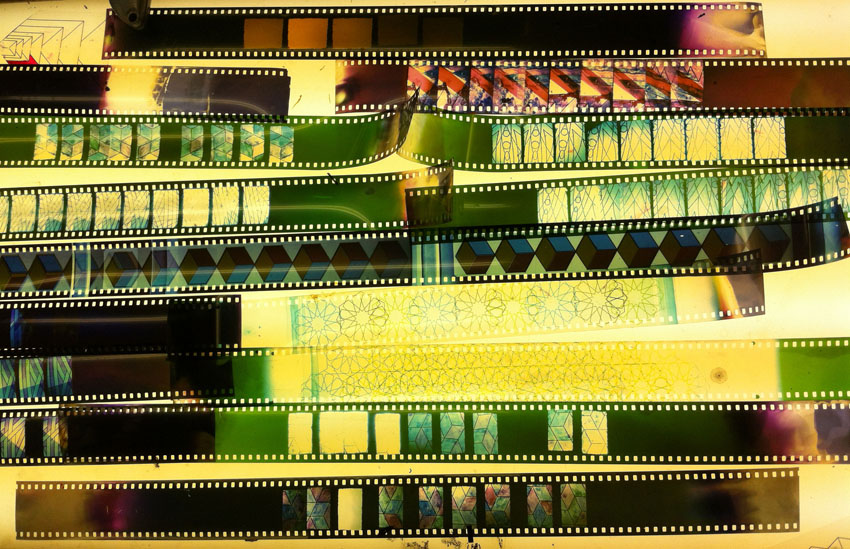 To celebrate the closing of the exhibition Thin Air by Leah Millar & Steffen Levring in NewBridge Project Space we staged an evening celebrating interdisciplinary collective practice, in all its messy complexity.  Screenings of collectively authored moving image works, including ScartVideo (Toby Lloyd and Harry Palmer) were followed by performace pieces by Portraits & Parhelion (London) and Noize Choir (Newcastle). Live music from Zahnpasta Brothers and a DJ set from Yaron Golan (of Keine Kunst fame) and pals completed the evening.

ScartVideo:
ScartVideo use low-tech audio and video analogue equipment, specifically designed, to generate material which is presented (and recorded) live. Two films are chosen to recreate new narratives and unexpected fusion – both in terms of pictorial and sensory distortion. The narrative is remade and given back to the viewer in which personalised fictions are re-established. Non-linear story making results without any prerequisite. The convention of prescribed and predetermined filmmaking, in which control is weaved and manipulated from the start to the end. ScartVideo take the films’ origins, playing and re-assembles them simultaneously. The result: To unlock unknown and self-determined narrative, that which occurs literally in real-time.

For In It Together, ScartVideo screen rarely seen work from their archive.

” Les Scotcheuses ” is a collective making films on “Super 8”, taking their name from the french for splicer – a tool for joining or splicing together lengths of film.  Their process is redefined each time they meet to make a film, according to the project and the group gathered around. Some among the collective already have a history with the production of films, some do not, and each film is an opportunity for shared learning and transmission practices.

“We make these films with groups in struggle, we belong with friends who cultivate different forms of resistance to the world that governs us, and with all those who share the idea that cinema can feed these struggles and resistances, by propagating them, enlightening them and preserving traces for the future. Our struggles need stories and sensible forms that are not only those of speech or of the leaflet, and may also be deployed in the field of cinema, without reducing it to the activist documentary.”

Screening at In It Together is ‘No Ouestern’, a post-apocalyptic western made in and with the occupants of the Z.A.D. (Zone À Défendre) in Notre-Dame-des-Landes: a zone of 2000 hectares of fields and forests in the French province of Brittany which is being threatened with destruction by the construction of a new international airport. The redundant project — the region already has a fully-functioning airport — will cost the French taxpayer over 550 million € and lead to the destruction of healthy wetlands and historical farms. Since 2005 the zone has been occupied by dozens of individuals who have fought to defend the autonomous structures they’ve built on the land, which is now inhabited by some additional 200-300 people from a variety of backgrounds. These occupants are experimenting with new ways of living and organizing outside the confines of the law, the capitalist economy, and the state apparatus.

For In It Together, Portraits perform with Parhelion: an expanded cinema work by Leah Millar drawn from the exhibition Thin Air.

** a textual source drawn from or drawing these figures’ ideas/lives/work.

Seymour Wright is an artist, investigator and saxophonist. He lives and works in London. His inter-disciplinary work uses situated learning as the stuff of creativity – what he has called the ‘awkward wealth of investigation’.
www.seymourwright.com/llln.org/robop.org

Daniel Blumberg is an artist and musician from London. ‎Over 7 years, he has released 6 records each under a different name‎, collaborating in the studio and live with musicians including Low, Silver Jews, Lambchop, Neil Michael Hagerty, Jad Fair and Norman Blake

Billy Steiger was born in Howth, Ireland on the 16th December, 1986. Now he plays the violin.

Noize Choir:
The Noize Choir is a performance ensemble that was formed in 2011 by Newcastle based artists Lindsay Duncanson and Marek Gabrysch. It involves a loose collective of noise enthusiasts with a common desire to use the human voice free of the traditional restraints of typical choral settings, language or musical notation.

Thin air brings together two artist filmmakers, Steffen Levring from Copenhagen and Leah Millar from Belfast.  Set up as a duo show with opposing screens, the interaction exposes similar interests but different approaches to moving image. Aiming to test the parameters within their practices, the collaboration allows the work to meet through sound and image spill. Seeking to overcome the challenges separate films face while occupying the same space, Thin air is a show which takes hallucination and the conjuring of new and perhaps unseen/unseeable images, as a way to understand the practice of film-making.