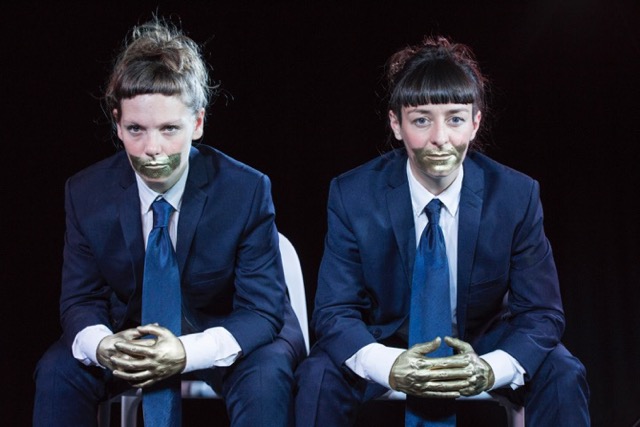 Originally conceived for the eve of the 2015 UK general election, Cock and Bull saw three females convene to perform their own, alternative, party conference. Exploring power, voice, agency and sustainability, they used the most heard phrases from governmental rhetoric to dismantle and redress dominant paradigms of power and Politics.

Responding to the meaninglessness and repetition of empty political promises, the privilege of the governmental elite and the deep discontent of an increasingly disproportionate and divided society, this work was part protest, part catharsis, part exorcism. It became, in part, a demonstration of togetherness.

Cock and Bull is a transforming choreography of words and a passionate speech of the body, underpinned with the real-time energy of political dissatisfaction and tory tongue-speak.

Delivered in partnership with the Tyne Theatre and Opera House.

Artist bio: Work under the artistic direction of Nic Green crosses and combines dance, theatre, sonics and site-specific performance practice. Her work has been commissioned and presented nationally and internationally to critical acclaim, receiving sell-out audiences in the Barbican’s main house, the Arches Award for Theatre Directors, ‘Best Production’ at Dublin Fringe Festival and a Herald Angel at the Edinburgh Fringe. Nic is currently working on TURN, a sited work for bells, song and radio broadcast speech (www.turn.org.uk). She is based in Glasgow.