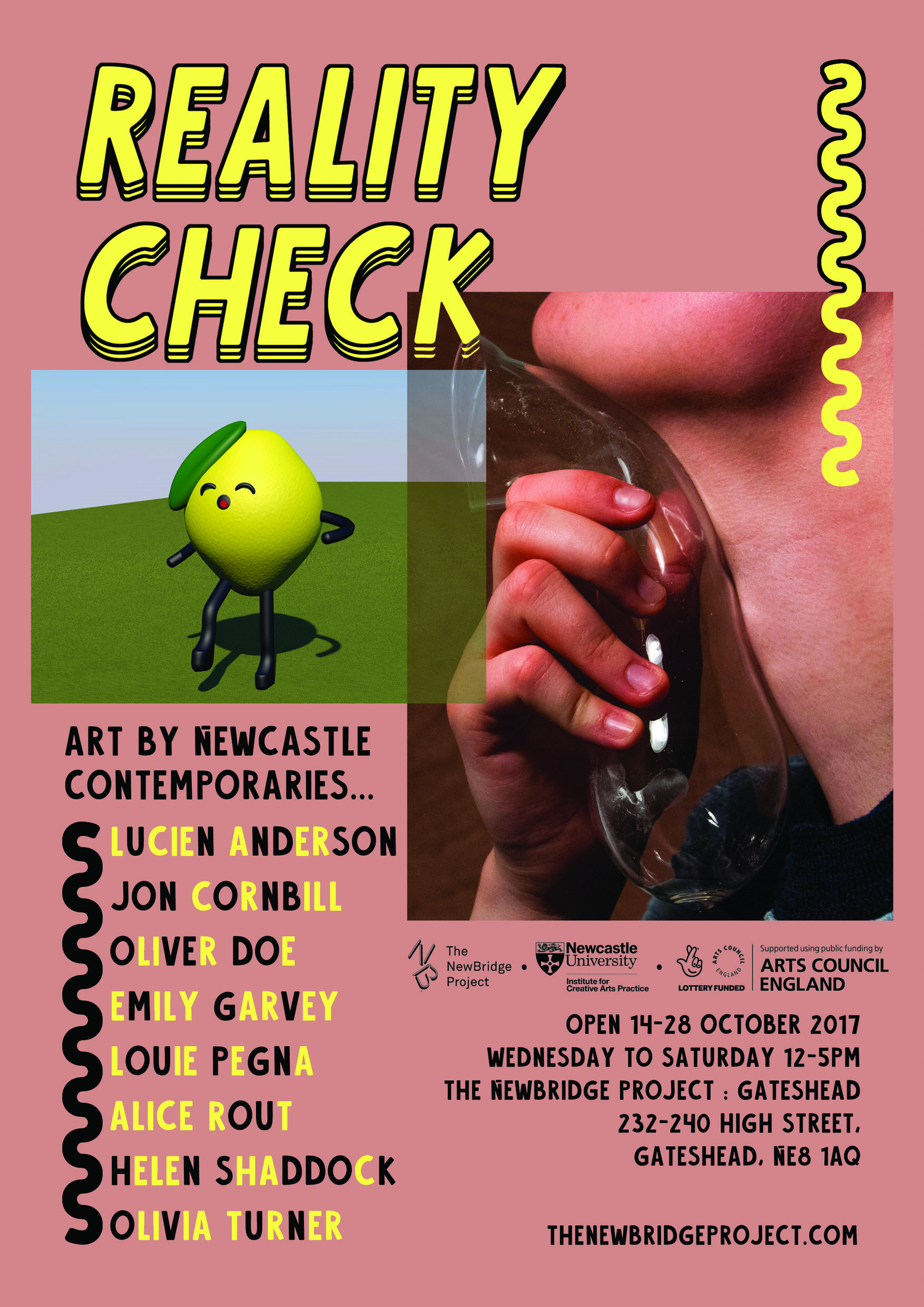 Reality Check was an exhibition that  brought together works by eight early-career artists, resulting from The NewBridge Project’s 2016-2017 Graduate Programme in partnership with Newcastle University.

Reality Check explored the role and identity of the artist and its connection to the everyday, engaging with a broad range of societal contexts from manual to emotional labour and introspective to extrospective ways of being and seeing.

The launch of Reality Check marked the launch of The NewBridge Project : Gateshead, a new gallery and studio space on Gateshead High Street.

Lucien Anderson’s eclectic practice is tied together with the methodical approach of an engineer, replicating rudimentary research & development and prototyping. Collating spontaneous video footage, he attempts to coax out a rationale or theme, whilst exploring the day-to-day habits of the artist as a human being. Helen Shaddock’s work presents a similarly honest yet raw account of trivial everyday activities from the point of view of a narrator. Through live stream-of-consciousness writing, Shaddock reveals the narrator’s meandering thoughts; dubiety, tiredness, relationships, and the pressures of modern life.

Emily Garvey constructs otherworldly multi-media works that elaborate on ideas of escapism from modern reality, pulling from both popular culture and introspection. Focusing on identity and self-doubt and deprecation, Garvey presents an animated character turning his inner turmoil into moments of joy. Alice Rout offers work that is embedded in dissociation, allowing both the artist and audience to project their fantasies upon a vast virtual world, manifesting in the form of a blank avatar. This projection allows us to examine our reality from an objective viewpoint, lost within Rout’s huge virtual landscape.

Jon Cornbill roots his practice in social, cultural and political diagnosis, continuously questioning our ever-changing systems and communities. Cornbill responds by playing with both scale and the values we hold in regard to tradition, in both artistic and social terms, to create a sense of difference. Louie Pegna also aims to make an alien landscape out of the familiar, using uneasy images and sounds to create a sense of alienation, and directly referencing a pop-cultural idea of aliens through audio-visual tropes. Pegna’s works are playful, and invite the audience to decode a diverse mix of imagery and ideas.

Oliver Doe’s work looks both inwardly and at wider social circumstances to examine ways in which the queer body is manifested in broader societal and cultural contexts. Reduced to essential elements, his works interweave an ephemeral trace of the body with subtle queer coding and suggestiveness. Olivia Turner’s work also attempts to articulate the corporeal, focusing on the hands as communicators of non-verbal gestures, and as sensory sockets for perceiving the body. Her current practice explores the effects of mitochondrial diseases on the senses, and explores alternative modes of perception and communication.

Reality Check was an the inaugural exhibition in The NewBridge Project : Gateshead, a formerly vacant shop unit on Gateshead High Street. The space has been transformed into a base that will be home to NewBridge Gallery, which will host a rolling programme of contemporary art exhibitions and commissions; studio spaces for artists at any stage of their career; and, our pioneering new graduate development programme, The Collective Studio, a collaboration with Newcastle University’s Institute for Creative Art Practice.

Lucien Anderson (b.1992, Huddersfield) creates work that incorporates installation, sculpture, video, digital image and everyday object. Anderson was awarded the John Christie Prize in 2016 and was shortlisted for the Gillian Dickinson North East Sculptor Award. Recent exhibitions include I’ve got too much on my plate, The Northern Charter, Newcastle; As Above So Below, Allenheads Contemporary Arts, Allenheads; and Hollow Horse, XL Gallery, Newcastle.

Jon Cornbill (b. 1993, Gateshead) works between video, sculpture, performance and installation. Recent exhibitions include I’ve got too much on my plate, The Northern Charter, Newcastle; Moving on Up, Moving on Out, NewBridge Project, Newcastle; XMAS DINNER, M I L K Gallery, Newcastle; and Night of the Museums, Turbo Gallery, Warsaw.

Emily Garvey (b.1993, Barnsley) is an artist who works with 3D modelling and video software to create digital alternate realities. Recent exhibitions include Roots and Wings, House of Blah Blah, Middlesbrough and Sunday Screening I, Platform Southwark, London.

Alice Rout (b.1994, Suffolk) is an artist based in Newcastle working with video, installation, text and sound. Recent exhibitions include ULTRA SUNRISE, SET Studios, London; Moving On Up, Moving On Out, The NewBridge Project, Newcastle; and Fünf Wochen Unendlicher Spass, Pathos München, Munich.

Olivia Turner (b.1992, Newcastle) is an interdisciplinary artist undertaking a practice-led PhD at Newcastle University. She is currently artist in residence at the Wellcome Centre for Mitochondrial Research. Recent exhibitions include Valence, Vane, Newcastle; Moving on Out, Moving on Up, NewBridge Project, Newcastle; and Glasgow International (2016).