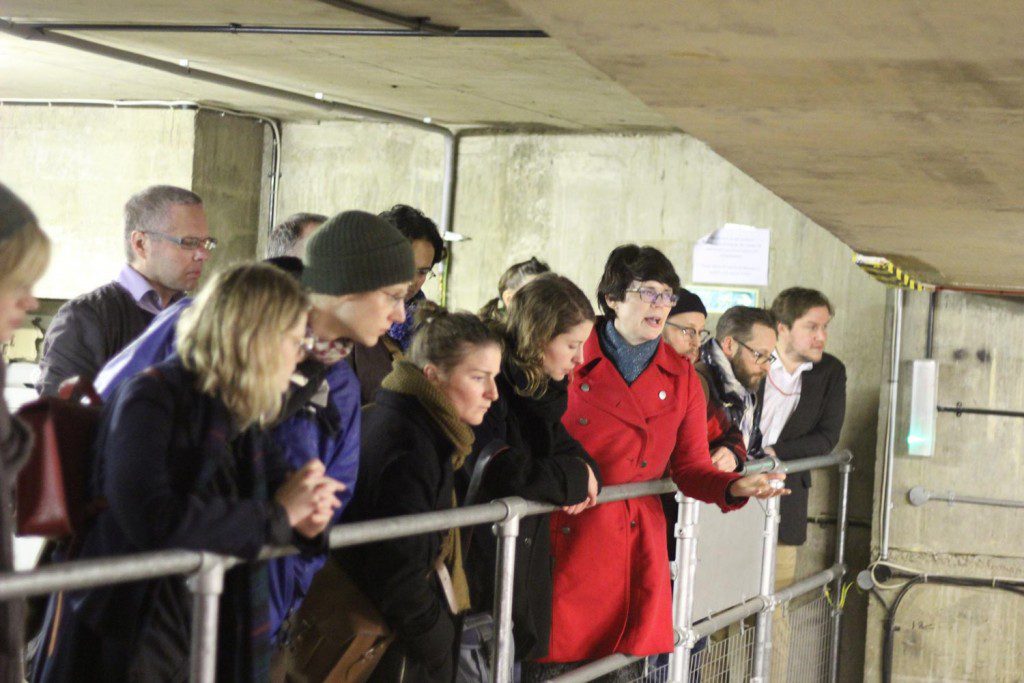 Reconfiguring Ruins brings together the School of Advanced Study, University of London, the Open University, Newcastle University and Sheffield University, The NewBridge Project in Newcastle and the Museum of London Archaeology (MOLA) in London.

We invite artists whose practice is concerned with the theme of ruins to participate in a free workshop as part of Reconfiguring Ruins: Materialities, Processes and Mediations.

Workshop:
The workshop will investigate how ruins are re-configured across time, space and media; it will include a series of talks, presentations and critical discussions, as well as site visits to ruins, chosen for the contrast between their location and the different cultures that surround them.

The workshop will feature Dr Nick Rush-Cooper discussing the mediations of the ruins of Chernobyl in videogames and Professor Bridget Bennett discussing ideas of home and crisis through neoclassical architecture in early America.

Reconfiguring Ruins co-investigators, Dr Adam Stock and Dr Mark Pendleton will be talking about research connected to the project. Dr Adam Stock will be focusing on ruins and apocalyptic temporalities in literature and film; Dr Mark Pendleton will explore Japanese ruins, including Hashima – an island made famous in the West as a location in the James Bond film Skyfall.

Dr Thomas Edward Wainwright will lead a site visit to Dunston Staithes, exploring our relationship towards decaying structures and their potential future uses. There will also be the chance to explore part of the Locus+ archive at their offices, formerly the Northern Constitutional Club.

If you are interested in participating in the workshop please email admin@thenewbridgeproject.com with a short paragraph outlining your interest in taking part (300words max).

More information on Reconfiguring Ruins: Materialities, Processes and Mediations:
Funded by an AHRC ‘Care for the Future’ Developmental Award, Reconfiguring Ruins brings together academics from the School of Advanced Study, University of London, the Open University, Newcastle University and Sheffield University to work across disciplines, geographies and media. Our project partners are the New Bridge Project (NBP) in Newcastle and the Museum of London Archaeology (MOLA) in London.

More information on partners/presenters:
Dr Adam Stock is Co-Investigator on the ‘Re-configuring ruins’ project, in which he’s looking at apocalyptic ruins in fiction and film. His book, Modern Dystopian Fiction and Political Thought is due to be published by Routledge in 2016. Previously, he has published on topics related to the history of ideas, science fiction, modernism, and utopian/ dystopian literature. Adam is Network Facilitator for the Leverhulme International Research Network ‘Imaginaries of the Future’.

Dr Mark Pendleton is a cultural and social historian and Lecturer in Japanese Studies at the University of Sheffield. His research interests include modern and contemporary Japanese history, the politics of memory in East Asia and transnational histories of gender and sexuality. As a co-investigator on the ‘Reconfiguring Ruins’ project, Mark is researching the haikyo (ruins) boom that has emerged in Japan since the 1990s.

Dr Nick Rush-Cooper is a cultural geographer with interests in the experiences of landscape, subjectivity and practices of knowledge production. His PhD Exposures: Exploring Selves and Landscapes in the Chernobyl Exclusion Zone was undertaken whilst working as a tour guide in Chernobyl. Current research examines the process by which ral world spaces are ‘translated’ into computer game spaces and how, in turn, computer game spaces shape cultural and embodied knowledge.

Bridget Bennett is Professor of American Literature and Culture at Leeds University. Her wide-ranging work moves across the disciplinary boundaries of literature, philosophy and cultural history and beyond. Bridget’s last book was entitled Transatlantic Spiritualism and Nineteenth-Century American Literature (2007). More recently, Bridget’s work has focused on ideas of home and crisis. Her new AHRC-funded Research Network project is entitled ‘Home, Crisis and the Imagination’. It examines how home and crisis are interlinked in the imagination, and will investigate the extraordinary power that home has as both a physical location and an object of representation. By investigating moments of crisis through the analysis of home, the network will show not only how ‘the’ home makes meaning through lived conditions but also how the home is itself a frequent site of crisis.

Dr Thomas Edward Wainwright has a background in architectural design and temporary installations, having worked in Berlin and New York on research-led projects, and a doctoral degree in applied architectural research. He has experience in working with leading artists, architects, planners, designers and educators to produce projects, research and provide analysis, writing and design services to all sectors of the built and physical environment.

Reconfiguring Ruins is supported by an AHRC ‘Care for the Future’ Developmental Award.

NewBridge is part of Kickstart Scheme!

The NewBridge Project x 11:11 Residency: Call Out for members!

The NewBridge Project is looking for new Trustees to join our Board.