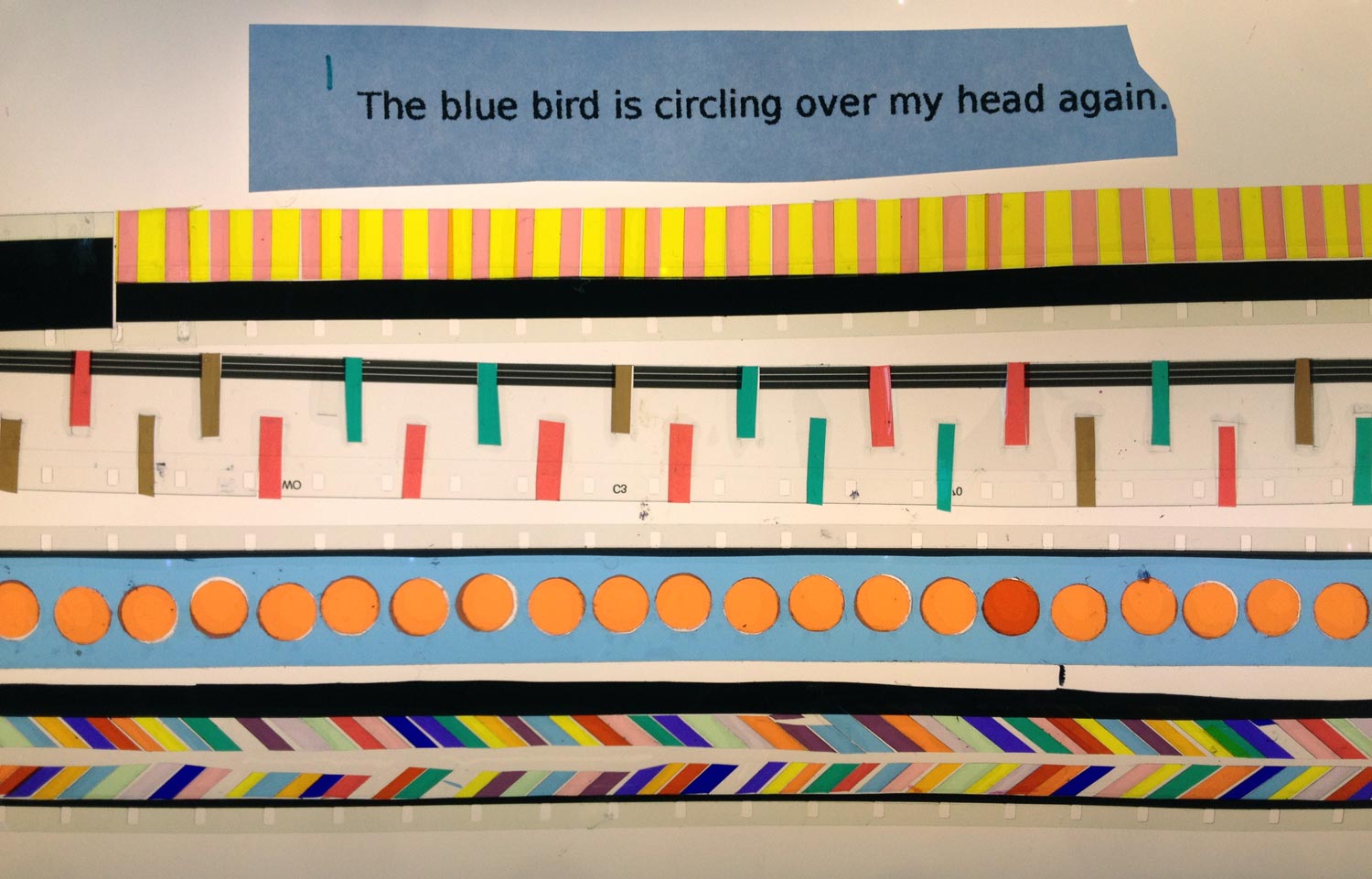 So many things seem out of place lately. My body feels mostly displaced, like a time bomb, I don’t know how I will deal with the fact that everything seems slower and slower and slower, its like a crazy roller-coaster inside my brain, my heart, my lungs, my kidneys, my rectum, all is a big big mess, I cant stop blaming myself. The sky is closing in purple.
///

The NewBridge Project proudly presented Nervous Skies, a transatlantic collaboration between Amelia Bande, Deborah Bower, Annette Knol and Mat Fleming. It’s an addition to their Gel Film series, an installation of 16mm film, slides and text. “Text and colour collide in a light show, which is as vibrationally intimate as it is technically spectacular. Multiple projections dance a thin line between oscillation and stillness.” The piece seeks to bring about emotional resonances, by precisely cut intense colour rhythms and chance symbiotic relationships in the mind, the eye and the heart. 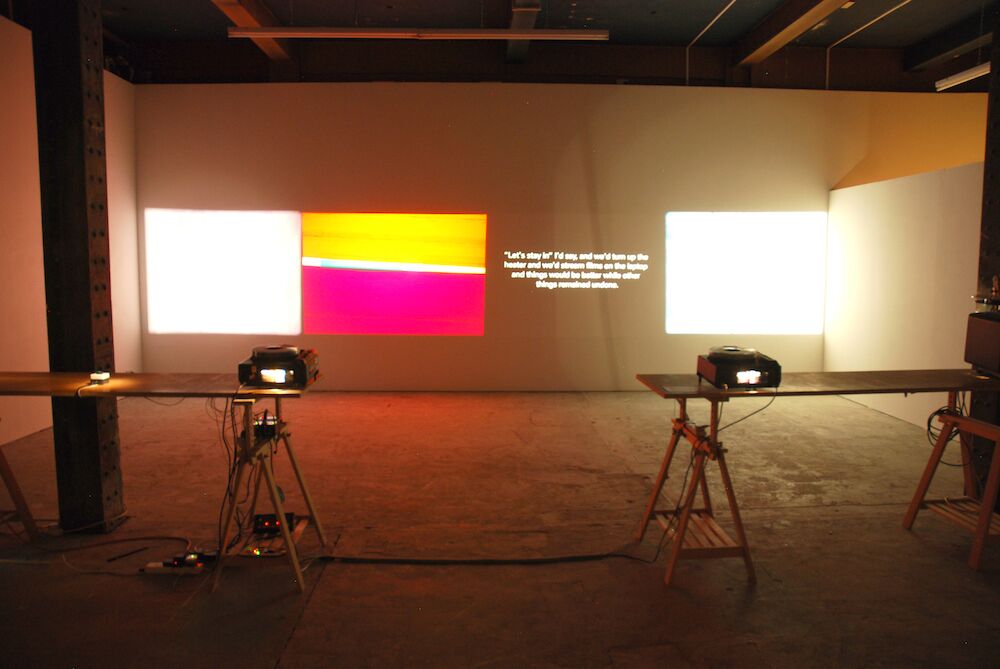 Nervous Skies was written collectively using automatic writing experiments. The four artists contributed with short texts produced fast and non-stop which were activated by prompt start phrases. The material was collected and edited into a single story by Amelia Bande. 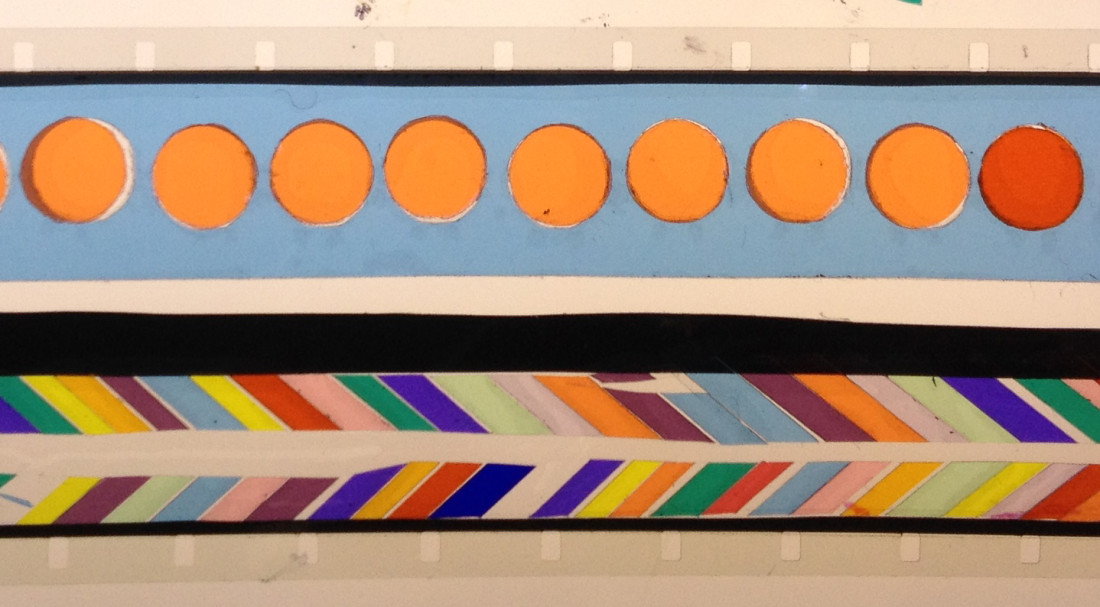 The Collaborators
This is the third collaborative work between Amelia Bande, Deborah Bower, Annette Knol and Mat Fleming. Their first collaboration was part of a performance and film workshop they created for Club Transmediale (Berlin) in 2011. They worked again as artists in residence at the artist film lab Filmwerkplaats in Worm, Rotterdam, 2012. There they created the film, Two Lakes which was the result of collaborative writing exercises, script by Bande and a visualisation process through the collaging of coloured lighting gels into film strips. Their collaborative work has shown at Osnabruck Film Festival, DK, BFI London Lesbian & Gay Film Festival, Selected III programme tour UK/USA (Videoclub) and Mix Festival, New York.

Amelia Bande (1977, CHI) is a writer and teacher from Chile. Her theatre plays have been staged and published in Chile. She currently lives in New York and runs creative writing workshops for people of all ages. With Annette she co-runs Publishing Puppies – a new press for visual work, plays, poetry, music, fiction, essays and other print experiments.

Deborah Bower (1982, UK) is an artist based in Newcastle Upon Tyne. She works with film and printmaking. She helped found the Star and Shadow cinema and is a member of the film collective Film Bee. Residencies & commissions have included Christiania Researcher in Residence, Copenhagen, Basic FM, Hospitalfields –  Arbroath and Berwick Film and Media Arts Festival.

Mat Fleming  (1976, UK) is an artist filmmaker living and working in Newcastle upon Tyne. He is a founding member of Star and Shadow Cinema and Film Bee; a filmmaking coop that runs a lab. It collectivises film equipment and works on collaborative films. His artworks have been screened internationally at film festivals, exhibitions, and as live performances. He is currently artist in residence at Dundee University’s Imaging Facility based in the School of Life Sciences.

Annette Knol (1976, NL) is a visual artist and printer. She co-founded the project space Kotti-Shop in Berlin, the print workshop Copyroboter and the press Publishing Puppies. Her artistic background lies within the fields of drawing and graphic design, though her work covers many mediums (ranging between print, film, installation & writing). Recurring themes in her practice are text, process, representation and celebration. She is currently studying a Masters in Fine Art at Pratt Institute, New York.